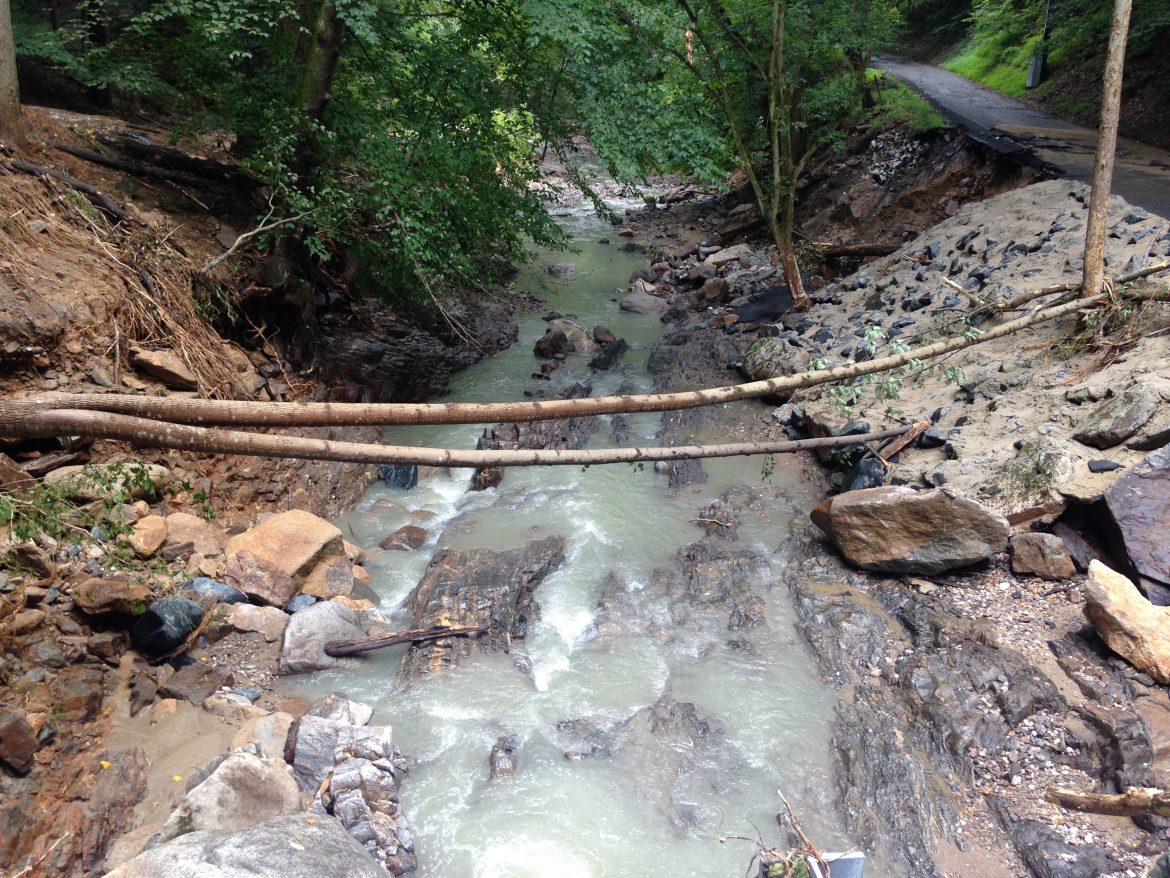 For citizens who care about our local waterways, the Patapsco Heritage Greenway’s Stream Watch program allows us to make an impact as citizen scientists and volunteer stewards. Stream Watchers can adopt a section of a waterway, volunteering to clean debris, monitor the health of the stream, and/or collect information on any stormwater damage, pollution, or potential restoration opportunities. Craig Hinners, one of our Stream Watchers, had the Stream Watcher experience of a lifetime during the flood last July. Below is his retelling of the events that unfolded.

My daughters and I left the house for Woodstock on the night of the flood at about 7:15. At the time, it was raining hard, and when we drove past Sucker Branch, we noticed that it was running high like it usually does during a strong storm, but nothing out of the ordinary.

We made our way slowly through flooded streets, making it as far as Woodstock Road, where we got turned around due to flooding. On the way back home, we had to detour through the High’s parking lot at Rogers and Town & Country, because the intersection was also flooded. The flooding was caused by Sucker Branch, which flows under the road at this point. If I had the presence of mind, I could have taken that as a warning of how bad it would be further downstream.

Driving back down Sylvan Lane, waterfalls were cascading off the hills onto the road. Just prior to the bridge over Sucker Branch, my headlights suddenly lit up a churning mass of muddy water where the road had been not much more than half an hour earlier. I was able to stop short and carefully reverse back up the hill in the dark and pouring rain without driving over the edge. (Sylvan Lane is only one lane here, cut into a ledge on the hillside.) We made it back to the Circuit Court and eventually to a friend’s house where we waited out the storm. We later made our way back home, walking in from the courthouse lot, since the road was washed out and there were fallen trees everywhere. Sucker Branch was back down to its normal level, like nothing had happened.

I spent the next day, Sunday, at friends’ houses, since my power was still off. On Monday, I went for an investigative hike on Sucker Branch and the Patapsco. The extent of the changes along Sucker were hard to comprehend. A new channel had been cut through the valley. What were previously earth embankments were stripped clean down to bare rock. The road was undermined where we had driven in the storm on Saturday. I realized just how close we had come to getting sucked into Sucker!

At the bridge, I noticed popped manhole covers from the sewer line that parallels the stream. A bit further upstream, I found a spot where foul, gray water was gurgling up out of the stream under pressure and realized I was looking at a break in the sewer line. I took a video of the scene and immediately phoned the location in to Howard County Utilities. I did not think much of it until the next day, when dozens of workers converged on the stream valley. The scale of the spill really hit home on Wednesday as I watched a Chinook helicopter deliver supplies to the area near the break, since Sylvan Lane was still impassible. Watching the huge dual rotor helicopter hover over our pastoral little stream valley was surreal.

As it turned out, debris in the flood water had knocked out a large concrete manhole riser, resulting in a 5 million gallon per day sewage spill. Construction crews took over the area for three months, restoring the sewer line and the natural course of the stream bed. We had to walk back in to our houses for a few weeks, and I carried a spare pair of shoes to walk through the raw sewage with. These were minor inconveniences compared to what neighbors on Main Street were dealing with, though.
Half a year later, the stream has been restored, the foul smell has been killed by freezing temperatures and the sludge washed away, large rip rap has been placed to protect the sewer line, and we once again see small fish in Sucker. The raging water chipped away at some history, such as the remnants of the Mentzel Paper Factory where Sucker meets the Patapsco, while simultaneously exposing history in the form of B&O Railroad historical artifacts in the river and along its banks. My daughters will have a story to tell about the time that their dad nearly drove them into raging floodwaters, and I have one about playing a small part in the recovery by finding the spill early on, which hopefully minimized its effects. I hope this serves as inspiration for other stream watchers!

Craig’s experience is far from usual for a stream watcher, but by becoming active in a section of a watershed, you also have the ability to protect the local environment from human-caused hazards. Any amount of effort is appreciated, not only by us, but by the local flora and fauna as well! For more information on the Stream Watcher program, follow this link. We hope to see you active in the Patapsco River watershed, whether as a citizen, steward or Stream Watcher!