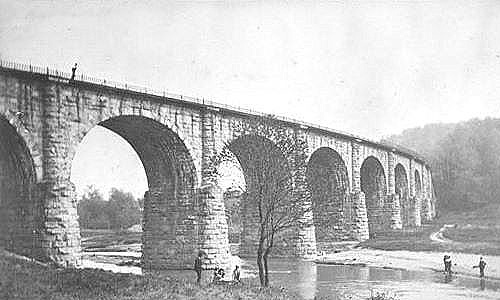 The Thomas Viaduct is a granite railroad bridge that spans the Patapsco River between Relay and Elkridge. For nearly 200 years, rail traffic has made the journey from Baltimore to Washington atop this bridge. Visible from the Avalon entrance of Patapsco Valley State Park, the granite arches reach almost 60 feet into the air.

This bridge highlights the central role the Patapsco Valley played in engineering innovations supporting the industrial revolution of our young republic. As rail grew to prominence throughout the country, the Patapsco Valley was at the forefront, in large part due to Baltimore investors in the Baltimore and Ohio Railroad, the first common carrier railroad in the United States. The Thomas Viaduct is, in fact, named after Phillip Thomas, the first president of the B&O. omit Railroad.

Phillip Thomas asked B&O engineer Benjamin Latrobe II, son of architect Benjamin Henry Latrobe, to design the bridge in 1831. Spanning 612 feet and gently curving four degrees, the design was groundbreaking [omit: no easy task]. Latrobe passed his carefully-made design onto John McCartney, an engineer from Ohio who had also constructed the Patterson Viaduct in Illchester. McCartney supervised the construction of the bridge, which started in 1832 and continued until 1835. The bridge’s construction was a major affair that required tons of locally-sourced granite.

When the day came to test the bridge, many doubted Latrobe and McCartney. Locals had come to call the bridge “Latrobe’s Folly” and feared that the weight of a steam engine would collapse the bridge. When the first two trains successfully crossed the bridge on July 4, 1835, the crowd was ecstatic. Since that time, every type of locomotive in rail history has traversed the Viaduct, from the original six-ton steam engines to today’s 300-ton behemoths. Latrobe got it right.

From 1835 onward, the bridge has continued to serve as a major connection between Washington and Baltimore. During the Civil War, the bridge was heavily guarded by Union soldiers on both sides of the span in order to protect the connection between Baltimore and DC. Moreover, the bridge highlights the Valley’s importance to the rise of industry in the nation. Throughout the 19th century, ingenuity in the Valley pushed our young republic to new heights of industrial grandeur.

To learn more about the site, visit its entry in the National Register:
https://mht.maryland.gov/nr/NRDetail.aspx?NRID=7

For a more detailed look, click below for the Maryland Inventory of Historic Properties:
https://mht.maryland.gov/…/M…/PDF/BaltimoreCounty/BA-143.pdf[/vc_column_text][/vc_column][/vc_row]