Discovering and appreciating nature in the Patapsco Valley has never been easier.

Bald eagles have returned and recent efforts to restore the river to its natural course are having a positive impact on the health of its aquatic life.

Activities such as trout fishing are back on schedule and the Banneker Planetarium is once again enabling visitors to explore the wonders of the galaxy.

Appreciation and insight into this delicate ecosystem are featured at the Howard County Conservancy where educational programs are offered throughout the year.

Patapsco Heritage Greenway is continuing to rally volunteers into removing trash, reporting invasive species and planting trees. Get your hands dirty and join us for an upcoming event. Better yet, become a member of the organization to help preserve and protect the Valley.

See below for just some of the natural resources that the Patapsco Valley and its surrounding areas have to offer for visitors.

From its initial 43 acres, Patapsco Valley State Park now preserves and protects over 16,000 acres, including the river and many of its tributaries.

While the flora and fauna of the valley have changed over the last century, the focus on natural resource protection continues to be at the center of park management and part of the region's cultural heritage.

To find out more about Maryland's oldest state park and the site of the world's first underwater hydroelectric plant, visit Maryland's Department of Natural Resources. 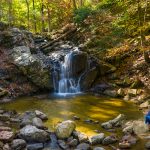 As any angler knows, the Patapsco River offers peaceful spots along a stocked river, and in April 2022, the Maryland Department of Natural Resources stocked 2000 Rainbow/Golden Trout in the Avalon Area of Patapsco Valley State Park.

Anglers in the Patapsco region may already be aware, but if you want the most updated trout stocking information, the Maryland Department of Natural Resources has a terrific online tool for finding out about recently stocked waterways in Maryland. Visit the map here

The Department of Natural Resources also posts stocking updates on Facebook, Twitter and through its email news service. Anglers may also call 800-688-3467 and press option 1 to get a recorded weekly update when stocking is in progress. These recordings are usually updated on Fridays. 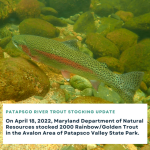 Despite the recent rise in gardening activities, in the past gardens and gardening weren't simply recreational spaces and activities that anyone could visit or participate in. Gardening was generally an elite activity in the 19th century, although others maintained small plots to provide sustenance for their families as well as spaces of respite.

In the Patapsco Valley Heritage Area, a notable 19th- century garden is being brought back to life by The Howard County Garden Club and the Howard County Department of Recreation and Parks. Based on flower pressings found in the 1840s journal of a former Patapsco Female Institute (PFI) student, the Mary Jerdone Coleman garden is a new interpretive feature at the PFI.

The garden will open on June 4th, 2022 and will highlight the teachings of renowned botanist Almira Hart Lincoln Phelps, the institute's principal from 1841 to 1859. 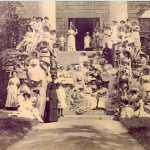 The Oella Entrance Garden started in 2008 to honor the bicentennial of the historic mill town of Oella, which is located just across the Patapsco River from Ellicott City.

The area was once neglected and overrun with invasive plants. It also presented the challenges of periodic flooding and a shallow level of soil over solid granite. With the help of volunteers planning, weeding, and planting, the area grew into a beautiful community garden filled with mostly native plants with views of the Patapsco River, Ellicott City, and Oella.

In 2016, the garden was designated as a "Monarch Waystation" because it contains plants that are essential for Monarch butterflies throughout their life cycle and migration. One of the plants that can be seen in the garden is Milkweed, which is the only plant that the Monarch caterpillar will eat. 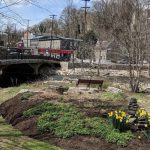 Vernal pools are a unique and important type of wetland habitat. They are usually shallow bodies of water that are temporary, unlike ponds and lakes. Vernal pools are filled in around early Spring from rain and melted snow and then dry up in the Summer. They provide a habitat for many species of animals including Wood Frogs and Spotted Salamanders.

Unfortunately, vernal pools are an unprotected and threatened habitat. This time of the year you may see vernal pools and hear Wood Frog calls while spending time in the Patapsco Valley! To learn more about Wood Frogs and to listen to their call, visit: https://musicofnature.com/calls-of-frogs-and-toads-of-the-northeast/ 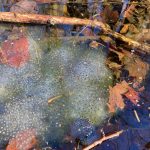 The Patapsco Valley is home to many different kinds of wildlife, including our national symbol- the bald eagle.

Bald Eagles live near water sources, in order to hunt for fish, and nest in large trees, which is why visitors and hikers in the Patapsco Valley may spot one of these large majestic creatures. Bald Eagles can be found in Maryland all year round. In March, Bald Eagles begin laying eggs (usually between 1-3 at a time). Since March weather can still be cold, the eagles must protect their eggs against the cold temperatures- be careful not to disturb nesting eagles!

Bald Eagles were once an endangered species in Maryland- primarily from the use of the pesticide DDT, which made their eggs thin and breakable. Since the ban on DDT, the eagle population has made a comeback and in 2010, Bald Eagles were removed from Maryland's Threatened and Endangered species list. Even though they are no longer considered endangered, there is still much effort put into the protection and conservation of these animals. 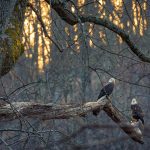 A male and female Bald Eagle with the setting sun. Patapsco Valley, Maryland.

A male and female Bald Eagle with the setting sun. Patapsco Valley, Maryland.

The Eastern Cottontail (Sylvilagus floridanus) is named for its small, white tail. They have speckled brown fur, long ears, and big dark eyes.

You can often find Eastern Cottontail rabbits in open fields and in backyards. They are most active at dawn and dusk and during the day will hide in dense vegetation and tall grass. Cottontail rabbits do not dig burrows, but will sometimes seek shelter in abandoned groundhog dens.

When startled, Eastern Cottontails will run in a zigzag pattern and can reach speeds of 18 miles per hour! 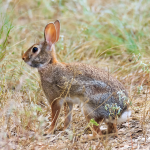 Did you know that Maryland is home to 27 species and subspecies of snakes? They are an important part of a healthy ecosystem as both predators and prey.

Although many people are scared of snakes, most species in Maryland are non-venomous. However, there are two species of venomous snakes in Maryland: the Timber Rattlesnake and the Eastern Copperhead. Both are pit vipers.

Other non-venomous yet commonly occurring snakes include the Common Watersnake, usually seen near bodies of water, such as lakes, ponds, and rivers, and Eastern Ratsnakes. Eastern Ratsnakes (also called Black Rat Snakes) are the most commonly reported snake by Maryland landowners and a common visitor to backyards. They are the largest snake found in Maryland and can grow up to 8 feet.

When you encounter a snake, the best practice is not to approach or handle it, but to leave it alone. Snake bites occur when the snake is provoked or when it feels threatened. 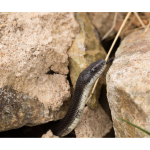 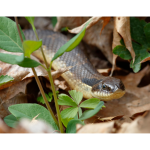 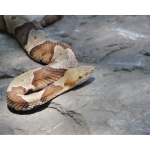 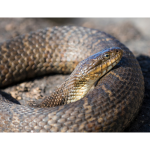 Winter Stoneflies are aquatic insects, which you can find while exploring the Patapsco River and its adjoining streams! Winter Stoneflies have the ability to survive in very cold temperatures. During Winter, the juvenile Stoneflies, called nymphs, can be found grazing the bottom of streams for food. They emerge in early Spring to become adults.

While taking a walk or hiking in the Patapsco Valley, take a look in the river or streams to find Winter Stoneflies. If you see an abundance of them, this is a good sign of a healthy environment. Water Stoneflies do not thrive in water with low oxygen or pollutants, so their presence is a good indicator of the water quality. 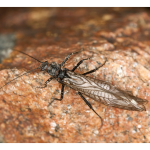 The Trout Lily (Erythronium americanum) is named for its brown and green mottled leaves, which resemble the markings of Brook Trout. This plant has a nodding, or downward-facing, yellow flower with six petals.

Trout Lilies are normally spotted in the spring at several locations in the Patapsco Valley State Park and only bloom for a short period of time every year. If you're ever in the area during this time, keep a lookout for these incredible wildflowers! 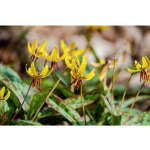 The Common Serviceberry (Amelanchier arborea) can be found throughout much of Maryland, including the Patapsco Valley. The white five-petaled flowers bloom in late March-April.

There are a few stories or folklore associated with the plant. It is said that when the flowers of the Common Serviceberry began to bloom, the European Colonists saw it as a signal of Spring and as a sign that the ground was thawed enough to dig any needed graves.

Another name for the Common Serviceberry is Shadbush, which was named because the flowers bloom around the same time that shad return to their spawning grounds in rivers and streams. Reddish-purple berries appear after the flowers bloom in Spring. The berries are a food source for many birds and wildlife, including the Baltimore Oriole. 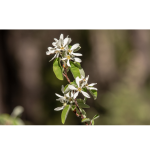 The Spring Beauty (Claytonia virginica) has a small flower with pink stripes and grows only 4-6 inches tall. The flower is in bloom from late March until June when it dies back. 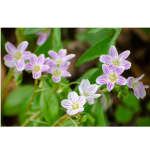 Bloodroot (Sanguinaria canadensis) is a native wildflower named for the orange-red juice found in the underground stem. This juice was used by Native Americans for dye, paint, and insect repellent.

In early Spring, the underground stem, called the rhizome, sends up a single bud with a leaf curled around the stem. The white flowers have 8 or more petals and a golden center and are in bloom between March and May. The plant has an aroma that attracts ants, which then pick up the seeds and disperse them. It also provides pollen for many of the local bee species.

If you find Bloodroot while hiking in the Patapsco Valley, be careful not to harvest the root as it is can be detrimental to the preservation of the native wildflower. 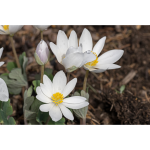 The Virginia Bluebell (Mertensia virginica) is a native wildflower known for its lavender-blue and bell-shaped flowers.

The buds, which are pink to purple in color, are seen first and then the flowers will bloom in clusters during March or April. If you would like to see the flowers in bloom, don't wait. The flowers typically only last around 3 weeks. The plant grows to about 1-2 feet tall and the foliage is a bright green color. In mid-summer, the foliage will die back and lay dormant until next Spring. 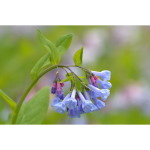 Skunk Cabbage is one of the first plants to emerge in the Spring. The reason for this early arrival: Skunk Cabbage can raise its temperature through a process called thermogenesis!

The heat that it produces allows the plant to emerge from the still-frozen ground. The maroon hood-like part of the plant is called the spathe, which protects the spadix, a structure that contains many petal-less flowers. The large green leaves appear after the flowers. Skunk Cabbage gets its name from the odor that it emits.

This 'skunk-like" odor attracts pollinators, which usually linger because of the warmth that the Skunk Cabbage provides. While hiking through the Patapsco Valley, you may see Skunk Cabbage in woodland areas with wet soil, wetlands, or near streams. 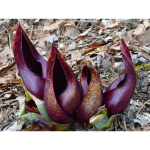 The Jack-in-the-Pulpit is one of the first native plants to come up in the Spring.

The unusual flower is green with maroon striped and the hooded shape is what gives the flower its common name, Jack-in-the-Pulpit.

The plant grows up to 1-3 feet tall and has large three-part leaves. This plant's red berries can be seen in the Fall. Be careful as these plants are poisonous to humans and some animals. 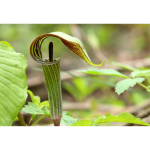