The History of Maryland Flows with the Patapsco River.

Commerce, industry, agriculture, warfare, and conservation have played parts in the pageant along this river’s course.

Past days echoed with now unfamiliar sounds: war shouts of the Susquehannocks; rasping of adzes and chisels shaping ships from hard oaks; the roaring of iron furnaces; creaking of hogsheads on rolling roads, repeated chopping of the woodsman’s ax; tramping of colonial and Civil War troops; clanging of ironworks; blasts of bombs bursting above a fort, inspiring our National Anthem; groaning of mills, whirring of looms, and the metallic song of steel wheels on steel rails.

In describing his early adventures up the Patapsco River, Captain John Smith wrote, "Heaven and earth never agreed better to frame a place for man’s habitation.”

For more than 200 years this river valley has given rise to historic events and scientific advances that transformed the State and the Nation such as:

Additionally, landscapes have also changed to include bicycle, pedestrian, and recreational paddling. The Grist Mill Trail is one such example of this transformation as it is a more moderate route and a popular destination for parents with children in strollers, families on biking trips, and people with disabilities.

Elkridge Landing was also an active port in the colonial era and provided a key point of trade/commerce. Today, paddlers enjoy calm waters above the Daniels Dam as well as further downriver where they can also put in at Southwest Area Park in Baltimore County. These days, commerce/trade that relied on river transport has been replaced by recreational uses of the waterway for paddling, fishing, and swimming.

Did you know that an estimated 13 million pints of Guinness will be drunk globally on St. Patrick's Day? Even though drinking Guinness is a longstanding tradition in Ireland and with the Irish diaspora, it's a tradition that is also tied up in almost a century of commercial advertising.

Here in the Patapsco Valley Heritage Area is the Guinness Open Gate Brewery and Barrel House: the first Guinness presence on the United States soil since 1954, and the first-ever purpose-built Guinness brewery in US history.

When visiting there are opportunities to tour the brewery and learn about the storied history of Guinness and the re-purposed historic building site. At this 62-acre site, brewing and distilling have been going on for nearly a century! The Brewery stands on the site of the historic Calvert distillery.

The distillery was originally called the Maryland Distilling Company and first opened in 1933, after Prohibition. To learn more about this topic, you can check out the Patapsco Short, Rye's Journey. 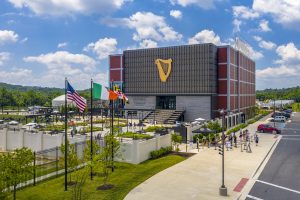 Learn about the #9 Trolley Line that arrived in Ellicott City in 1899 and served the community for the next 55 years here. 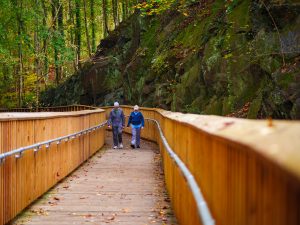 Public transportation is an integral part of improving community life. Meant to improve social inclusion and provide access to education, employment, and healthcare to all, having options like bus lines are important aspects of public infrastructure.

In the Patapsco Valley Heritage Area, the establishment and eventual closure of the Woodstock Bus Line (which also happened to be the first licensed bus service in Maryland) is a fascinating example of how a community has utilized, grown with, and expanded public transportation options over time. To learn more about the Woodstock Bus Line, check out this fascinating talk given to the Granite Historical Society by John Brantley here.

The bus line was operated by Walter Vernon Trail and later by his son, Hodges Trail, from 1916 until 1970. The presentation focuses on how and why the bus line came into being, how the Woodstock Line was integrated into first, the Baltimore Streetcar System, and later, the Baltimore Transit Bus System, and will offer up some memories of those old enough and fortunate enough to have experienced riding the bus. 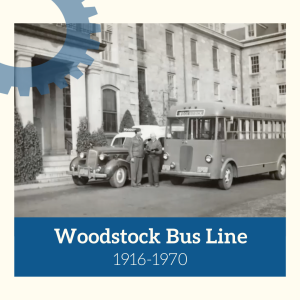 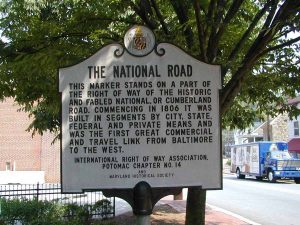 The Route 1 corridor in the PVHA runs through both Howard and Baltimore counties, provides the main entrance to the Patapsco Valley State Park Avalon area, and includes a portion of the PVHA's 2020 heritage area boundary addition in Baltimore County.

Route 1's remaining iconic roadside motels offer some of the last remaining vestiges of the roadside traveler hotels that once existed near Patapsco Valley State Park. 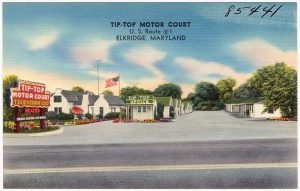 In the 18th Century, the abundance of forests for charcoal and oyster shells for lime made the Chesapeake Bay area a major producer of iron for Great Britain. The earliest iron furnaces in the Patapsco Valley were located nearby Elkridge Landing.

Iron production continued in the Patapsco Valley until floods devastated many of the industries along the river shortly after the Civil War.

Erosion from the iron strip mining along the River and the logging of the steep Valley slopes eventually silted the harbor at Elkridge Landing and the shipping point moved further downstream to the present-day Baltimore harbor.

The Great Falls of the Patapsco, located just upriver from Elkridge Landing, once prevented further navigation up the Patapsco River when the Valley was first settled. The same soil erosion from cultivation, mining, and logging operations that led to the silting-in of the harbor at Elkridge Landing also buried the Great Falls. A sign at the intersection of the Patapsco Valley State Park entrance road and Gun Road in the Avalon/Orange Grove section gives the approximate location of where the falls are believed to be buried. 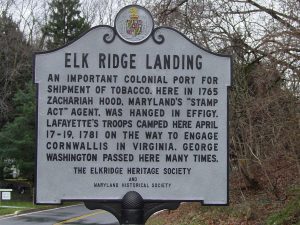 The Thomas Viaduct is a granite railroad bridge that spans the Patapsco River between Relay and Elkridge. For nearly 200 years, rail traffic has made the journey from Baltimore to Washington atop this bridge. Visible from the Avalon entrance of Patapsco Valley State Park, the granite arches reach almost 60 feet into the air.

This bridge highlights the central role the Patapsco Valley played in engineering innovations supporting the industrial revolution of our young republic. As rail grew to prominence throughout the country, the Patapsco Valley was at the forefront, in large part due to Baltimore investors in the Baltimore and Ohio Railroad, the first common carrier railroad in the United States. The Thomas Viaduct is, in fact, named after Phillip Thomas, the first president of the B&O.

Phillip Thomas asked B&O engineer Benjamin Latrobe II, son of architect Benjamin Henry Latrobe, to design the bridge in 1831. Spanning 612 feet and gently curving four degrees, the design was groundbreaking [omit: no easy task]. Latrobe passed his carefully-made design onto John McCartney, an engineer from Ohio who had also constructed the Patterson Viaduct in Ilchester. McCartney supervised the construction of the bridge, which started in 1832 and continued until 1835. The bridge’s construction was a major affair that required tons of locally-sourced granite.

When the day came to test the bridge, many doubted Latrobe and McCartney. Locals had come to call the bridge “Latrobe’s Folly” and feared that the weight of a steam engine would collapse the bridge. When the first two trains successfully crossed the bridge on July 4, 1835, the crowd was ecstatic. Since that time, every type of locomotive in rail history has traversed the Viaduct, from the original six-ton steam engines to today’s 300-ton behemoths. Latrobe got it right.

From 1835 onward, the bridge has continued to serve as a major connection between Washington and Baltimore. During the Civil War, the bridge was heavily guarded by Union soldiers on both sides of the span in order to protect the connection between Baltimore and DC. Moreover, the bridge highlights the Valley’s importance to the rise of industry in the nation. Throughout the 19th century, ingenuity in the Valley pushed our young republic to new heights of industrial grandeur. 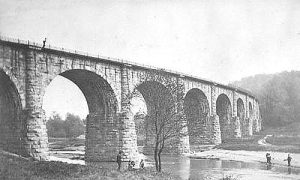 The first thirteen miles of the B&O Railroad ran from Baltimore’s Mount Clare Station through the Patapsco River Valley to Ellicott’s Mills. Halfway, passengers stopped for lunch at Relay while a fresh horse was hitched to the box-shaped closed car.

The routes chosen for railroads often followed the course of rivers, providing a scenic and delightful view for passengers. However, the scenery had nothing to do with the choice of routes. River valleys cut through mountains and provided railroads with easy grades that were close to sea level. The more level the railroad grade, the lower fuel consumption and the faster the trip, which helped the railroad to show a higher profit.

In the summer of 1830, the Tom Thumb, the most famous of the early locomotives, was on a trial run when it was challenged to a race by a horse-drawn passenger car. The Tom Thumb held the lead until the band which drove the pulley that drove the blower snapped from the drum, causing the steam engine to lose power and the horse won the race. Soon afterward, the steam engine was improved. By the summer of 1831, the Iron Horse was pulling the train to Ellicott’s Mills on a regular schedule, and the horse went out to pasture. 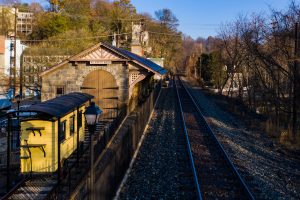