The Patapsco Valley: First in Innovation and Conservation

For more than 200 years, the Patapsco Valley has been the focal point for historic events and scientific advantages that have transformed Maryland and the nation.

The Valley, and the Patapsco River that shaped it, harbored communities from the first settlements of the Delaware tribe to historic towns like Ellicott City and Elkridge that sprouted along the river in support of the earliest industrial development in America.

The Valley’s rich farm and rural lands and historic travel routes of road, river, and rail created an environment that fostered innovation and transformation. It attracted bright minds and willing hands, which helped seal the Patapsco Valley’s reputation of being a “valley of firsts”.

Almanacs are annual publications that include a variety of information. In North America, almanacs such as The Old Farmer's Almanac, record and predict astronomical events (like the rising and setting of the Sun), tides, weather, and other phenomena with respect to time.

Benjamin Banneker published his almanacs annually from 1791-to 1797. His almanacs were innovative not only because they were produced by a black man in an age when African Americans were often considered incapable of scientific, mathematical, or literary accomplishment, but because they also included commentaries, literature, and other editorials that had a political and humanitarian purpose.

For example, in his 1793 edition, Banneker included his 1791 correspondence with Thomas Jefferson. In this correspondence, Banneker challenges Jefferson regarding the ideas he put forth in his "Notes on the State of Virginia" that implied African Americans were an inferior race. In the same volume, Banneker included excerpts from anti-slavery speeches and essays from England and America. Ultimately, these almanacs were not only useful publications providing important information, but they were also a form of advocacy for the abolition of slavery in the United States.

Additionally, thanks to the efforts of the National Museum of African American History and Culture, you can take a look at the transcription of Banneker's 1793 almanac here. 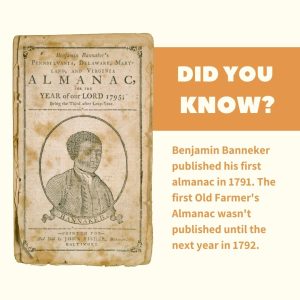 Even as industrialization shaped the region, the Patapsco Valley became a leader in conservation. The abundant natural resources centered on the Patapsco River and spreading outward along its tributaries included great stands of forests, outcroppings of granite and diverse plant and animal life. Recognized by the Olmstead brothers as a “greenway” in a rapidly developing corridor, the Valley was at the forefront of the conservation movement.

The burgeoning population of the Patapsco Valley demanded innovation in transportation so that farmers, millers and manufacturers could get the raw materials needed for production as well as transport their finished products first to Elkridge Landing and later to Baltimore for sale and shipment around the world.

Today, when we talk about technology corridors, we think of Silicon Valley in California or Route 128 in Massachusetts, but the Patapsco Valley can lay claim to being the first tech corridor in the new nation.

On May 24, 1844, Samuel F.B. Morse sent the first telegraphic message, “What hath God wrought?” along an experimental line from Washington D.C. to Baltimore that crossed the Patapsco River Valley and the Thomas Viaduct bridge.

Firsts in technology and engineering include: