Old Ellicott City in the Eyes of Artists 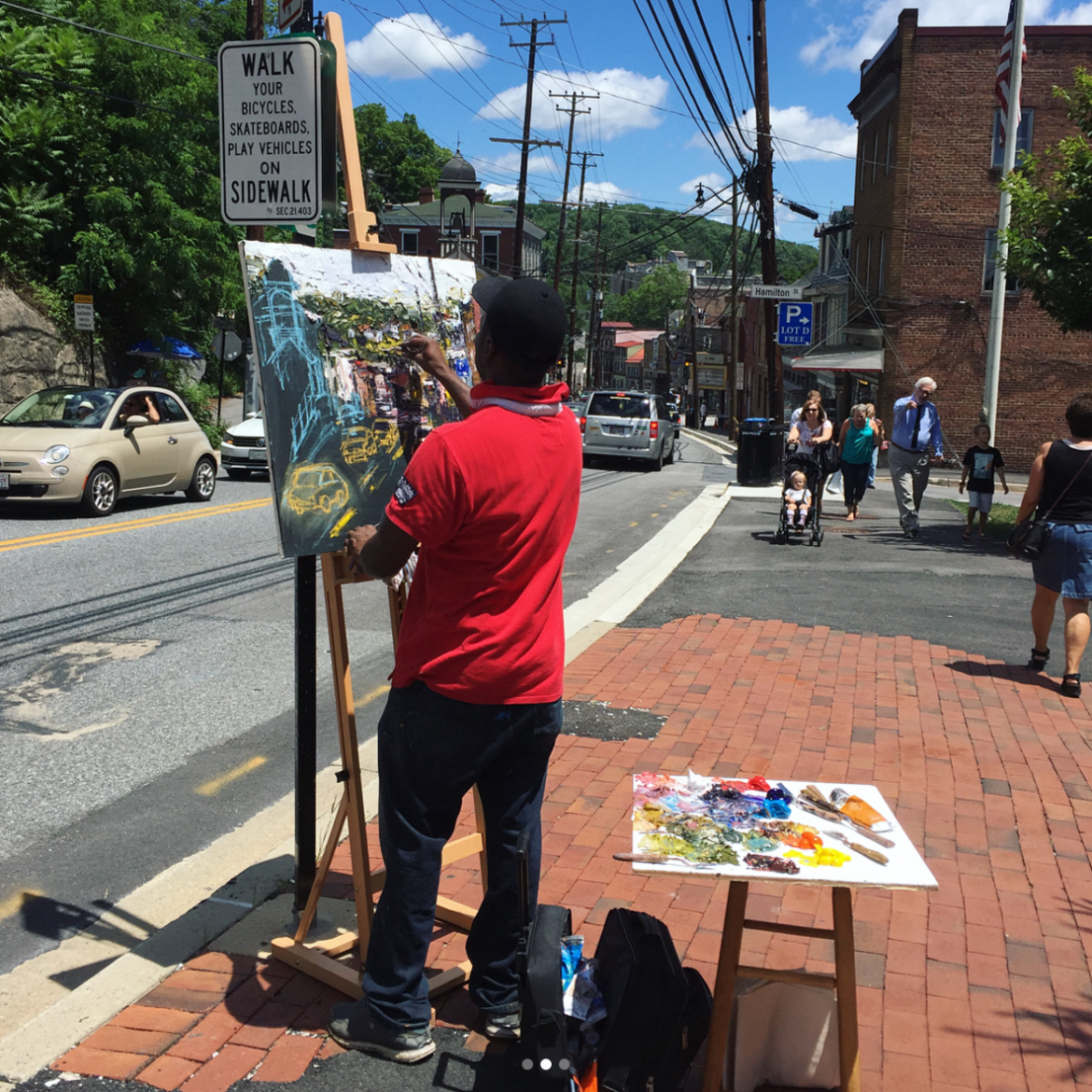 With the town in mid-summer vibrancy after nearly a full year of restoration post-flood, locals of all ages are capturing the beauty of Old Ellicott City in their artwork. With the practice of putting ink to paper, whether it’s to draw with lines or to draw with words, there emerges within us a deeper connection to our sense of place.

If you have walked around Old Ellicott City any time in the past few weeks, you likely noticed at least one person, if not multiple people, seated with sketchbooks in their laps or standing behind easels at various points along the streets. Last Friday, I almost tripped over a lady seated on the stoop next to Patapsco Heritage Greenway’s office door as she sketched the exterior of the former horse stable that is now a part of Manor Hill Tavern. Some of these people have been drawing for half a century, while others are new to the practice and want to use historic main street as their subject. Although there are differences in skill and style, each person is taking time out of their day to observe their immediate environment: a beautiful, historic town with a wealth of detail to discover.

Up until the 1920’s, drawing used to be a required proficiency in schools. It shared the same academic space as arithmetic, history, science, and literature. In fact, drawing was identified as a bridge between these subjects. The ability to draw requires a competency in mathematics. Even if the artist isn’t writing equations as they draw, their brain is intuitively understanding the relationship between objects and a in space filled with light. Many of the world’s most recognizable drawings are of scenes from history and literature, and what makes these artworks so memorable is the attention to subtle details. Artwork can also influence the creation of literature, such as Big Sur & the Oranges of Hieronymus Bosch by Henry Miller. After a while, artworks themselves can be considered important in historical cannons, and history can influence the value of art, as is the case with the Mona Lisa. Before cameras were invented, scientists like Ernst Haeckel were taught to draw in order to better communicate findings and to enhance the accuracy of their observations. There are minute details in nature that our eyes and brains skip over for efficiency’s sake. If our brains focused on everything in a scene all at once, we would be overloaded with stimulus, but that doesn’t mean that we should always remain unaware. The visual difference between a spruce and a fir tree is unapparent at first glance, but looking intently at how the needles attach to the twig reveals a distinguishable difference, and informs us that there are many more differences to be discovered if we look closer.

Art has many values beyond the potential Sotheby’s auction price. By focusing effort into the practice of sketching our surroundings, we immerse ourselves in a scene and discover new characteristics of a place that we might have visited many times before. In a sense, drawing teaches us to observe. Subtle details of a tree or a storefront emerge from the background of our day into the foreground of an experience. Halting the busyness of our lives for an hour or two, or even a handful of minutes, allows our brains to be more present. Not only do our brains release endorphins while creating art, our brains also increase the amount of neural matter in areas that deal with visual perception, spatial navigation, fine motor skills, and cognition. In a developing brain, drawing encourages mental connections between the outside world and our inner creative inclinations. In an aging brain, drawing allows the brain to improve its functional connectivity and increase its stress resistance. To put it another way, creatively interacting with our surrounding environments engages our brains in an actively fulfilling way and reduces the risk of future cognitive decline. Even aging brains are constantly developing, as our neural connections are constantly in flux as we receive and process sensory information. Placing a strong mental focus on our surroundings even sharpens our memory!

In present day Old Ellicott City, people are taking to the streets to actively observe the surrounding beauty hidden in each granite stone. While most of the people drawing around Old Ellicott City are likely not dreaming of having their artwork become as famous as the Mona Lisa, each piece of art has value. By presenting what Old Ellicott City looked like on a certain day, future historians will have visual sources to refer to, future botanists will have a better understanding of the types of plants present, and future generations will observe the details of the paintings with intent to appreciate the beaut