All Hands on Deck at Adkins Arboretum 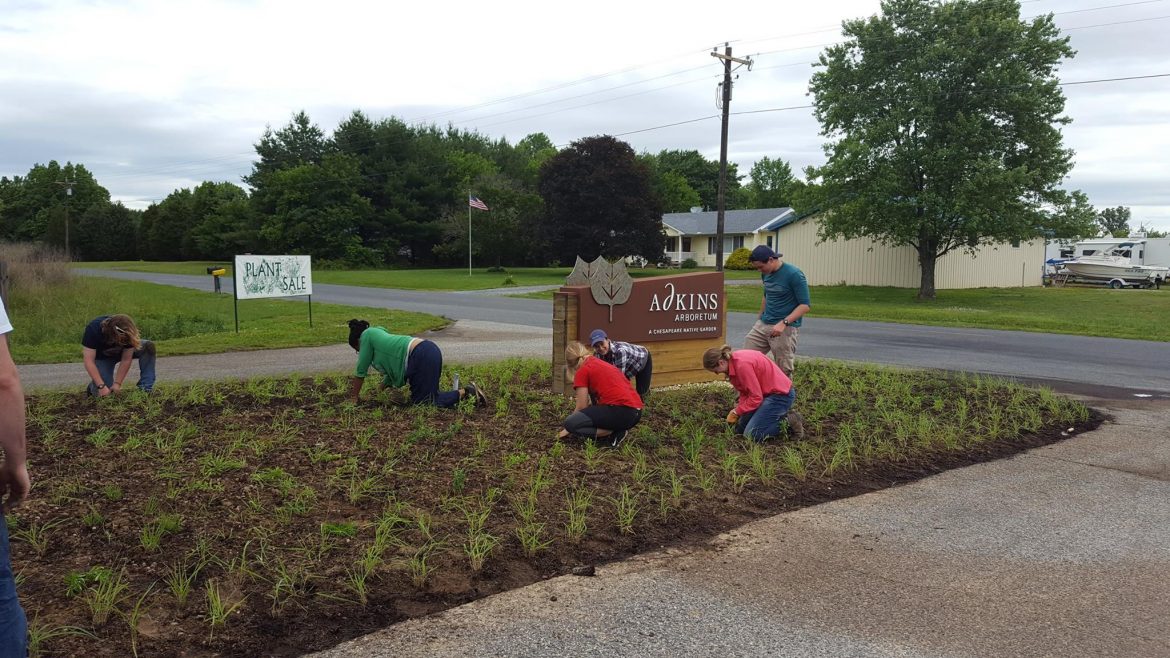 As part of the Chesapeake Conservation Corps experience, a handful of corps-members wrote an application to host an All Hands on Deck project at their host site. For an All Hands on Deck, the corps-members spend the day at one corps-member’s host site. Usually, there is a lecture, a service project, and a bit of fun. For our most recent AHoD, we visited Kathy Thornton, a Howard County native, at Adkins Arboretum, where we were absorbed an informative lecture by Claudia West about sustainable landscaping before we planted the entrance garden to the arboretum and canoed around Lake Tuckahoe.

A week or so before the date, Kathy sent out an email asking if anyone would be interested in camping the night before in Tuckahoe State Park. Myself and three others took her up on the offer. I left work early Thursday to beat Bay Bridge traffic, then spent almost two hours exploring the state park before I drove to the campground and found Kathy searching the area for firewood. I told her about the wildlife that I found (I almost stepped on a juvenile Eastern Kingsnake), the tea-colored creek that I crossed over, reddish-brown with the tannins of decomposing leaves that are recycled into the trees through their roots, and asked her if she ever walked the yoga trail by the lake where I almost stepped on the snake. She told me that she’s spent most of her time at the arboretum, so I might’ve known more about the state park than she did after that short hike. After the other three corps-members showed up, we stored our firewood in the car, drove to get dinner in Easton during the rain, went back to the campground, and started a fire. It was a slow start because the wood was damp despite being stored in the car, but after a couple hours it was roaring. I can safely say that the fire was one of the best campfires that I’ve ever witnessed.

We woke up a little after 7am to go on a hike before we started our All Hands on Deck. After we all packed up the tents and cleaned the campground, Kathy left to prepare for the day, and we wandered down a scenic nature trail that led us to the shore of a cypress marsh. After staring at the scene for a good while, we realized that we should walk back in order to be at Adkins Arboretum a little bit before the 9am start. We were hungry and in need of coffee, so we swiftly caravaned to Adkins Arboretum’s visitors center less than five minutes away.

After being greeted by smiling faces, we filled our plates with bagels and fruit, found our way to the lecture area, and sat down and sipped coffee from clay mugs sculpted by a local potter. The mugs were hand-made and branded with the logo of Adkins Arboretum, a tulip poplar leaf. I marveled at the craftsmanship. As we were eating, a woman with a powerful smile started preparing at the front of the room. Once the clock struck 9, we listened intently to Claudia West talk about the theories behind designing a sustainable garden.

Claudia’s lecture was filled with heartfelt passion. She informed us that gardens should mimic nature, in contrast to how we’ve historically viewed landscaping. Whereas we think it normal to place plants in isolation within oceans of mulch, that way of landscaping not only creates more work and maintenance for us by encouraging weeds to grow within the mulch, but it also is in direct contrast to how said plants have evolved throughout the years.

We have based our ideas about landscaping from our ideas about farming. We think monoculture farming to be natural. A field of just corn, followed by a field of solely soybeans. When we harvest, we till the soil, killing beneficial bacteria and fungus and reducing the soil’s ability to retain water and nutrients. Without biodiversity in a field, we spray pesticides to fend off insects from our acres of product, when lavender and other plants could be grown within agricultural fields, as many plants have evolved chemical defense mechanisms against insects to discourage feeding. While permaculture and agroecology create a higher yield-per-acre of product than monoculture farming, and need less externalities to function efficiently, so too does a diverse garden create a higher degree of sustainability, as well as a more fulfilling sight for admirers.

There is little brown mulch in nature, but a wealth of green mulch, aka living plants. While it may be pricier up front to pay for more live plants, it’s an investment in the long term scale that is cheaper and creates sustainability within the garden. With living plants acting as ground cover, there are less externalities that need to be bought for maintenance, such as weed killer, fertilizer, and more brown mulch, as well as less effort spent towards weeding.

The reason why green mulch works so well is that plants in a wild field or meadow have evolved within dense communities. There is a trend in modern landscaping towards the idea of a designed plant community, wherein there are multiple layers to a garden, and the plants are chosen based upon the light, soil, and climate conditions of the area, as well as their ability to thrive as a community.

The middle layer is the seasonal theme layer. Claudia picked aster, butterfly milkweed, and nodding onion for this layer. As perennials, these plants produce dazzling colors dependent upon the season. The aster plant produces a vibrant purple flower in late summer and autumn, when other plants are losing their non-green coloring. Butterfly milkweed produces its flowers in early summer, and nodding onion has uniquely-shaped flowers that bloom in mid-summer.

The upper layer is known as the design layer, which is the dominant layer in regards to a garden’s visual impression. Bluestem was used in Adkins Arboretum’s Entrance Garden not only because of its tall and tufted appearance, but also because of its appeal to wildlife.

In order to ensure as little weed growth as possible, a fourth layer is introduced called the dynamic filler layer. This layer is the lowest layer of the garden. By sprinkling the seeds of purposeful weeds into the garden, the process adds an additional natural resistance to unwanted weeds. Wild columbine seeds will be sprinkled around the garden. As a short-lived perennial with a three to four year lifespan, the goal for this plant is to take up as much unused space as possible until the functional layer grows thick enough to discourage further weed growth.

All of the plants in Adkins Arboretum’s Entrance Garden were chosen with the local soil and climate conditions in mind. The plants in the garden all tolerate dry, sandy soils. By choosing plants that fit the local soil and climate, less money needs to be spent on mulch and fertilizer due to the plants’ natural capacities to survive in those conditions. Not only does this method reduce cost, but with the help of soil conditioner at the onset of planting, the method also increases the health of the soil, as symbiotic bacteria and fungi are allowed to thrive without interference from tilling, pesticides, or fertilizers.

The layering of a diverse array of plants within a garden not only improves soil health, but it allows us to capture the visual landscape of nature, thereby giving our gardens the same emotional connection that we would feel if we discovered a wild meadow while on a hike that stopped us in our tracks and made us soak in its raw beauty. Every single plant counts in regards to the plant community, and each plant serves both aesthetic and functional purposes.

After listening to Claudia disseminate her expertise on sustainable landscaping, we filled our fingernails with soil as we planted the various plants. Once we were finished, Kathy led us on a trail around the arboretum on our way to a pavilion for lunch, stopping at the goat enclosure to feed them leaves from the nearby sweetgum trees. As we continued our walk, we stopped at a mulberry tree to pick mulberries, which I added onto my salad. Because we’re three-quarters of the way into our year as corps-members, there was a lot of talk about our futures. Some already had job offers, others have been religiously scrolling on job sites. As I am still not entirely sure what career path I wanted to pursue, I thought a bit more about sustainable landscaping as a potential path as we finished lunch, and continued to think about my future as we all canoed around Lake Tuckahoe. I don’t know how my personal future will unfold, but in a post-wild world, we humans must do our best to ensure that the planet is hospitable, and one way to do that is through mimicking nature in our gardens. As less and less of the natural world is untampered by humans, we must be in tune with our inner steward to help nature proliferate.