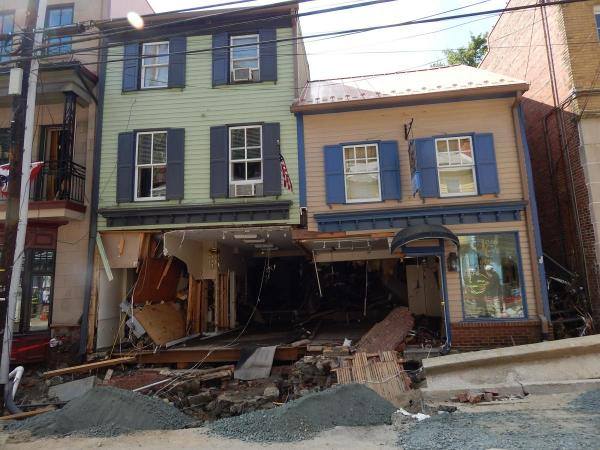 This timeline is a work in progress. The Patapsco Heritage Greenway is asked regularly to speak about the recent devastating flood. At these talks, we receive many questions about what happened that night and although the answers are still being pieced together, we thought we’d begin the story by creating a timeline.  This evolving timeline of the 2016 Ellicott City Flood is  an attempt to provide the sequence of events that occurred on July 30, 2016.  It includes multiple links to other references. Please feel free to send edits or corrections to info@patapsco.org and we will continue to update and revise to create an accurate record.

8:01 p.m. The first reports of flooding near Ellicott City occur near the Chatham area west of downtown Ellicott City.

8:05 p.m. The worst flooding in Ellicott City begins as stormwater overfills the Hudson Branch and begins to jump the channel- flowing eastward near the intersection with Rogers Avenue. Although the water temporarily returns to its channel, it jumps it again near the Ellicott Mills Brewing Company where it has difficulty navigating a 90-degree turn and smaller culvert under Main Street. Water begins to flow down Main Street. Meanwhile, the Tiber creek, fed in part by the Hudson, jumps its channel and floods Lot D where most of the vehicles are impacted. The Tiber and the Hudson roar together towards Old Columbia Pike, overfilling the channel and flooding buildings on the south side of Main Street from the back.

8:15 p.m. The Patapsco River continues to rise as the tributaries within the Patapsco Valley begin to empty into the river. According to the US Geologic Survey, the river rises 6’ in an hour and at its highest and fastest is measured at over 28,500 cubic feet per second on the Hollofield gauge.

8:30 p.m. The two tributaries (the Hudson and the Tiber) begin to impact the 8300 block of Main Street. As the water rises cars continue to be swept into the channel, and down along Main Street and eventually swept towards the Patapsco. Some cars carry passengers and pedestrians are also swept into the water. Videos begin to show a foot or two of water inside the buildings at 8200 Main Street, some water now coming through to Main Street from the backs of the buildings. At some point within this time period a stormwater retention pond at Burgess Mills breaks through its dam and sends water cascading down Ellicott Mills Drive. Diners from Portalli’s restaurant are evacuated to the second floor and then, after they can feel the force of the water shake the building, escorted safely out of the back of the building and up the hill to St. Paul’s church where they are given shelter. Meanwhile in the Tiber Alley, Matthew Milani, owner of The Rumor Mill, also began evacuating 8 staff and 47 guests to higher floors and then via a series of ladders to higher ground. Diners in Bean Hollow and the Phoenix also evacuate safely to second stories to await rescue.

8:45 p.m. The National Weather Service receives the most significant reports of flooding. Although the rain begins to taper off, the floodwaters surge eastward down Main Street and towards the Patapsco River. At the back of 8100 block of Main Street the force of the water rushing down two additional tributaries along College Avenue and New Cut Road converge into the Tiber cause devastating damage to the buildings. The water from the Tiber rips through the floorboards and breaks through rear and side brick, block and frame walls. The street curves slightly north at this point and water rushing down Main Street and the rising Patapsco appear to converge with water rushing through the buildings from the Tiber at this spot. A security video from the north side of the street captures a car being washed into 8111 and 8113 Main Street, turning around several times destroying interior walls and supports before washing back out again trailing electrical wire and conduits. More video is captured from diners and from security cameras and they record the flood from nearly every Main Street perspective. Post storm, the National Weather Service, the Howard County Emergency Management and the Howard County Department of Public Works will confirm that flooding occurred both from the Patapsco and from flash flooding within Ellicott City.

8:50 p.m. The floodwaters rise as they sweep east towards the Patapsco along Main Street. The force of the water eventually carries one of the cars over the top of the Bloede Dam. Over the next few days, over 200 cars were towed from Main Street to Centennial High School including 20 cars removed from the river.

8:55 p.m. A human chain forms to rescue a woman from her car. Jason Barnes, owner of All Time Toys, worked with others to build a chain to reach Jamie Knight, who was trapped in her car. The first attempt was thwarted when the force of the water swept Barnes off his feet and forced him to work his way back up the street for a second attempt.

9:00 p.m. Flash flooding eases on Main Street but the Patapsco River crests- rising a total of 14 feet in just an hour and half. Stores closest to the Patapsco register 6-8 feet of water.

11 p.m. A Nighttime video of the flood aftermath records the devastation to the town.

11:59 p.m. County Executive Kittleman calls for a state of Emergency.

Sunday morning, the bodies of Joseph Anthony Blevins, age 38 and Jessica Watsula, age 35 are recovered nearly two miles downriver. Both were swept from their cars during the flood.

The first of two active sewer leaks caused by the flood are identified, this one at the Sucker Branch just upstream from Ellicott City. The second was found on August 6 at Millers Run in Baltimore County. Together they dumped more than 25 million gallons of raw sewage into the Patapsco. It would take several days and the assistance of the National Guard to airlift equipment into place before the leaks were fixed.

Owners are let back onto Main Street for the first time since the flood on Saturday night. Executive Kittleman announces that a Disaster Assistance Center will open on August 2 to provide services to Ellicott City residents, businesses, employees and property owners affected by the flood.

Four to five buildings are deemed total losses and that number would rise to eleven buildings as further structural evaluations took place.

Kayaker, Bobby Barker finds and secures part of the Ellicott City clock which had been swept away from where it had previously stood at the B&O Train Station plaza.