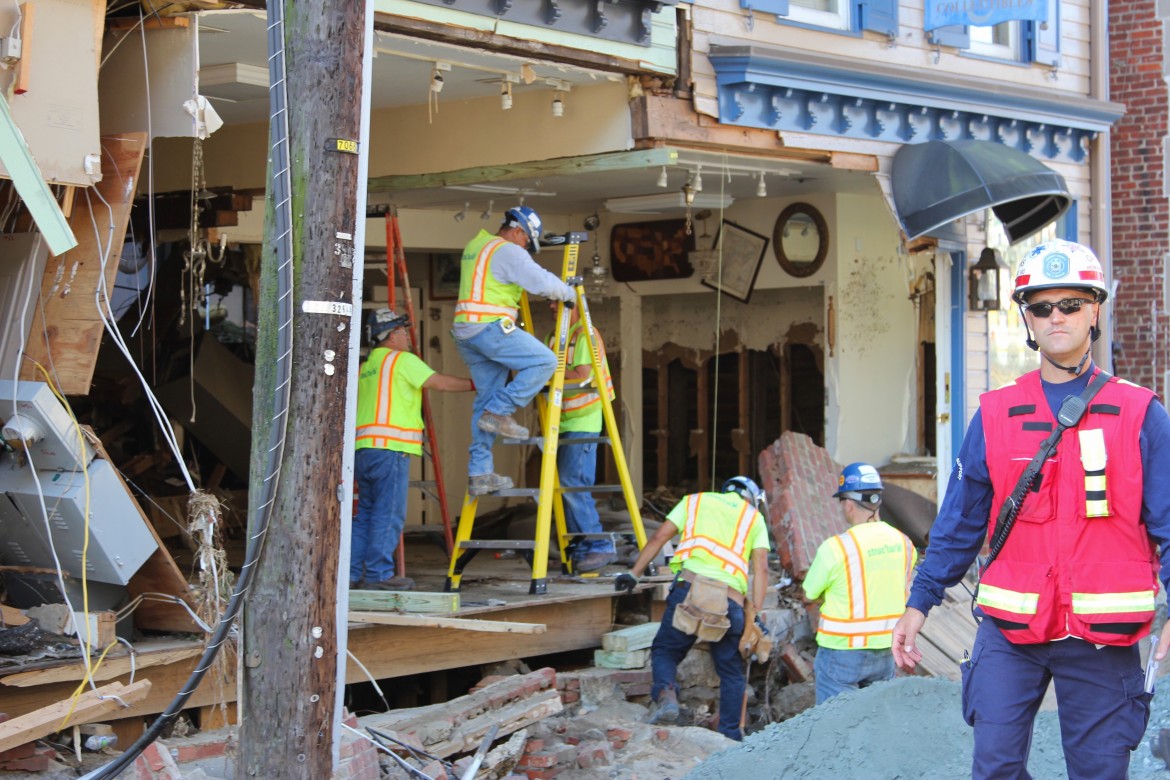 Last week I attended my first Howard County Watershed Improvement Network (WIN) meeting. WIN is a group of stakeholders with a shared interest in protecting and restoring local watersheds. It is facilitated by the Howard County office of Community Sustainability and meets regularly. (See below for a list and links to some of the participating groups)

Jim Caldwell of the Office of Community Sustainability, the main speaker at this event spoke about stormwater impacts from the recent flood in Ellicott City. Caldwell clarified that the Ellicott City “one thousand year” storm is not a storm that happens every one thousand years, but rather the statistical probability of a storm of this magnitude has a .1% (or one in a thousand chance) of occurring in any given year. Weather.gov explains the statistical significance of this storm in more detail.

Caldwell reminded us that Ellicott City, historically, was no stranger to flooding. He pointed out its origins as a mill town during the early days of the industrial revolution. During this era the town and surrounding mills were built to take advantage of the tributaries that flowed downhill towards the Patapsco.

Relative to the recent storm, engineers are analyzing data to help create a model of the flood to try to determine the exact causes. Videos taken throughout the storm and from many different angles along Main Street will help with this modeling.

Assumptions based on preliminary data indicate that the flood began around Toll House Road, and by the time the water reached Rogers Avenue, cars were already floating down the street. Once the water reached the street’s impermeable surface, it followed a path of least resistance until it could find its natural channels. The water first tried to re-enter the stream around West End Auto, and a great deal of water was able to return to the Hudson channel by the historic firehouse that is now the Wine Bin.

At the same time, water was coming downhill from the courthouse area into parking Lot F. Combined with Lot F overflow the stormwater within the channel encountered a 90-degree turn just before the Ellicott Mills Brewing Company. Unable to navigate the turn and the tighter channel the water jumped back into the street and flowed downwards to the Patapsco.

Meanwhile, the Tiber channel flooded parking lot D behind La Palapa. Floodwaters forced cars into the stream and blocked the culvert at that location. With no way to flow through the channel, the water rose up and flowed through the street meeting the water from the Hudson.

By lower Main Street, near the merging of New Cut Road and St. Paul Street, two tributaries flow and meet behind the buildings that housed Sweet Elizabeth Jane’s and Joan Eve. These two tributaries are thought to have caused the most significant damage. Water uncontained by the channel rose through the floors of the building, destroyed windows and walls from the backside-out and broke through the storefronts joining the water rushing down Main Street. In this video, you can see the water flowing not into, but out of Portalli’s.

Caldwell pointed out that the Patapsco River itself had little to do with the flooding. Because of the immediacy of the tributary floods, the river hadn’t flooded yet, allowing the water flowing through Main Street to release into the river and flow with the current towards the Chesapeake Bay.

In terms of preparing for the future, Caldwell said that whether or not we agree on the causes of climate change, it is irrefutable that microburst storms, such as the storm that caused the flood, have become more prevalent in the past five to ten years. Receiving two to three inches of rainfall in shorter timeframes means more surface water to manage and more potential for flooding in low lying areas.

Engineers have been brainstorming potentials for new infrastructure, entertaining ideas from the drastic to the small-scale. Radical ideas have been discussed, such as diverging the Tiber and Hudson channels directly into the Patapsco River instead of winding through and under Main Street. Smaller ideas such as improving channels to slow the flow and creating more capacity in existing stormwater ponds are also being explored.

At this point, Howard County awaits the hydraulic modeling to be completed by early next year which will help inform future stormwater infrastructure decisions.

My takeaway from this meeting is that the best that we can do is to persevere with what we have and plan for the future. Statistical analysis states that the storm had a 1/1000 chance of occurring in any given year, but with the current increase of microburst storms and Ellicott City’s history of flooding, the data of the past can only predict so much.