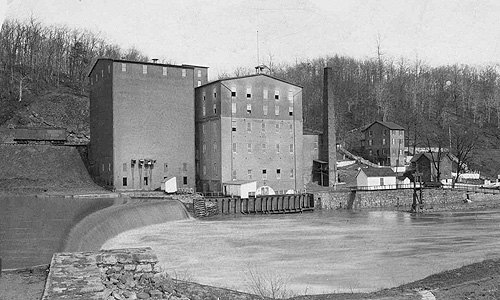 On the east bank of the Patapsco River, across from the Swinging Bridge, lie the remains of the Orange Grove Mill. Visitors to Patapsco Valley State Park’s Avalon entrance can walk right up to the ruins and see this piece of history. Though little remains, the granite foundation is still a thought-provoking reminder of our valley’s industrial past.

From the Grist Mill Trail, park visitors can see the former foundation of the mill site. A granite wall, built into an embankment between the trail and the nearby railway, is the only surviving remnant of the site visible to hikers. Built in 1884, the wall was the foundation of the mill’s warehouse.

The Orange Grove Mill was the last of the flour mills to be built in the Patapsco Valley. Constructed in 1856, the mill was erected on land purchased from the Ellicott family earlier in the decade. The site was chosen by the mill’s developers George Baily and George Worthington for its ample water power and for its proximity to the B&O railroad. Unlike many of the earlier mills, the Orange Grove complex was deliberately oriented alongside the railroad to simplify shipping.

Baily and Worthington owned the site for its first six years, before selling the mill to Charles A. Gambrill in 1860. Gambrill, already the owner of the Patapsco Mill in Ellicott’s Lower Mills and his Baltimore City mill, incorporated Orange Grove under the Charles A. Gambrill and Company. During this time, a small community of factory workers grew around the mill. These workers occupied a number of dwellings in the area. As the mill town grew with the prosperity of the company, more dwellings were needed to support an increased labor demand.

By the fourth quarter of the 19th century, the mill town had expanded to encompass both banks of the Patapsco River. A large row of workers’ houses was built across the river from the mill. To allow their workers to cross each day, Charles Gambrill sponsored the construction of a suspension bridge across the Patapsco River. Although the original bridge was lost to fire and flooding, a modern suspension bridge nicknamed the Swinging Bridge still stands in its place.

Despite prosperity during the 19th century, the mill’s fate took a turn for the worst when, in 1905, a fire blazed across the industrial complex and into nearby worker’s houses. Charles A. Gambrill and Company, owning two other mills, opted not to repair the damaged mill site. Instead, they salvaged whatever they could from the site and moved the laborers upstream to work at their Patapsco Mill.

While some residents of the Orange Grove community stayed behind, the town ceased existence by 1920 when its land was purchased by the Patapsco Forest Reserve. The mill’s long-abandoned ruins remained until they were washed away by Hurricane Agnes in 1972. Today, only granite foundations remain to tell the story of what 120 years ago was said to be the largest flour mill east of Minneapolis, capable of producing 1,000 barrel of flour a day.

If you want to see this site for yourself, visit the Avalon entrance of Patapsco Valley State Park:
https://dnr.maryland.gov/…/Avalon-OrangeGrove-GlenArtney.as…