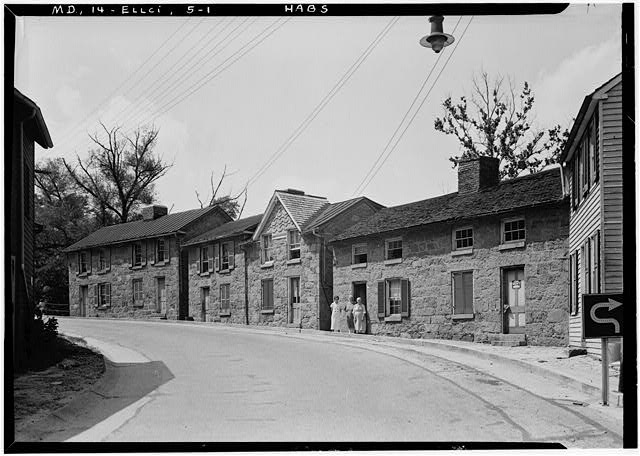 HISTORIC BACKGROUND: In an unusual venture for a woman of her time, widow Anne Tonge built Tonge Row in the early 1840s as rental houses for mill workers in Ellicott City.  This series of three historic stone duplexes is listed on the MD Inventory of Historic Properties and contributes to the character of the Ellicott City Historic District, both local and National Register. Tonge Row’s simple, yet sturdy stone facades, constructed of Ellicott City’s well-known granite, have appeared in movies and the Les Miserables TV miniseries (2000).

FAÇADE REHAB:  Our historic building, despite its significance and general appeal, had some rotten wood trim, windows without weather stripping that allowed infiltration, and non-compliant doors. Because part of Patapsco Heritage Greenway’s mission is historic preservation, improving the façade seemed a perfect opportunity to exercise that mission and encourage others in the community to follow suit.  The goals were to complete the work following preservation practices and guidelines and to stand as a shining example of just how wonderful these historic district buildings can look when resources are leveraged.[/vc_column_text][/vc_column_inner][/vc_row_inner][vc_column_text]In order to renovate the Tonge Row façade, we were able to combine funds from the Preservation Maryland and Historic Ellicott City Partnership’s 2017 Historic Ellicott City Revitalization Grant Program with the Façade Improvement Program offered through the Howard County Historic Preservation Commission. Additionally, the building owner contributed to the shortfall between the costs and grant funds and is subsequently eligible for a 25% tax credit from Howard County for the exterior façade improvements.

Façade improvements could be made in any number of ways, but our project primarily focused on replacing inappropriate shutters and doors with more accurate wood ones as seen in historic photos and in restoring the existing wood window frames and sash, making them functional and weathertight, repairing any damaged woodwork, adjusting façade drainage, and removing extraneous clutter from the facades. No changes were made to masonry.

Once the decision was made on exactly what work should take place, the following was necessary to obtain proper permissions from the various authorities, so we:

Only then were we able to proceed with the façade rehab work.

This 1936 HABS photo by EH Pickering was used in restoration of the Patapsco Heritage Greenway’s Tonge Row offices in the center building.  The Queen Anne style updates to the 1840s façade were highlighted and fixed louvered shutters and paneled doors reinstalled on both houses.[/vc_column_text][/vc_column][/vc_row]